This morning at State Parliament  Opposition Leader Luke Foley made a number of announcements on heritage matters that the Labor Party will take to the next state election in 2019. Amongst the announcements from  Mr Foley were:
1. Development of a 10 year heritage strategy for NSW that will be a roadmap for heritage management;
2. Restrict the s32 provisions so that the state government cannot plead economic hardship on heritage matters like they have on the Sirius project;
3. Restrict the ability of the Minister for Heritage to ignore recommendations from the Heritage Council;
4. Strengthen the provision of the Heritage Council;
5. Move the Office of Premier and the Cabinet Office into the old Chief Secretary's building on the corner of Macquarie and Bridge Streets.
For those who want to read the speech click here 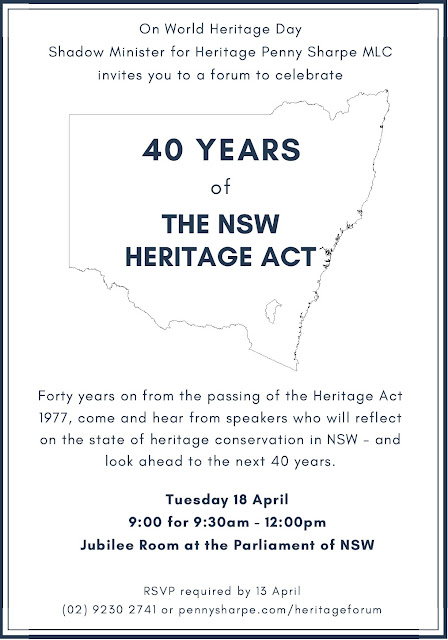 Meredith Burgmann is the former President of the NSW Legislative Council and co-author of the book Green Bans Red Union - the Saving of a City. She spoke about the history of the Green Bans in the 1970s in a legal environment where there were no legal protections for heritage matters. She went on to outline: the development of resident action groups; and the conditions that were conducive to  development of  heritage legislation in the 1970s including (a) community activism around the Vietnam War, (b) Anti-Aparheid, (c) environmental issues and (d) anti-discrimination legislation.

Reece McDougall is the former CEO of GML Heritage Consultants and Executive Director of the NSW Heritage Office from 2006 to 2008. He spoke on the history of the 1977 Heritage Act introduced by the Wran Government. He maintains that the conditions that allowed its introduction included (a) the legislation support for the National Trust in 1960, (b) international factors including travel by Australian witnessing overseas activities (c) the green bans (d) the 1976 environment and planning legislation by the Askin Government that was just window dressing. He also outlined the 1998 amendments to the Heritage Act that introduced the State Heritage Register and the advantages of having a separate heritage office in the state government.

Shaun Carter is the immediate past president of the NSW Chapter of the Australian Institute of Architects. He has organised a crowd funding effort and taken the state government to court over the decision to demolish the Sirius building in The Rocks. He spoke about the benefits to the community of retaining its built heritage including (a) acting as a marker that allows stories to remember (b) containing cultural heritage (c) we need to know who we were to know who we are. He bemoaned the loss of the best of 20th century buildings and many are not even listed on local heritage registers.

Paul Connell is the organiser for the Public Sector for the CFMEU who led the campaign to save the NSW Heritage group within Public Works from privatisation. That is saving the stoneyard at St Peters which is the home of the stonemasons who look after the maintenance of the state governments stock of sandstone buildings.  The stoneyard also has heritage roofing plumbers and carpenters who until the Baird Government used to work with the Government Architect. The stoneyard is the site of (a) apprentice training in traditional trades, (b) stockpiles of Sydney yellow sandstone and (c) centre of WHS.