Flowers can be uplifting and provide a bright spot in a dull. The local area is in full bloom with street trees, in private gardens and in other locations.

Flowers offer a sense of the new and bright perspective on a dull place—a sense of a new dawn, a new awakening. Flowers give inspiration when you are feeling down in the dumps. Try walking around the streets of Camden and Elderslie and feel inspired and uplifted.

A casual walk through Elderslie at the moment reveals the wonder of the early spring blooms that you get in the local area. The air has been crystal clear after recent rain with no haze. The light has an intensity that any keen photographer would notice and results in great images. The Sydney Basin is usually enveloped in a haze, and it is pleasant to witness the strength of colour that occasionally happens after rain. The crisp morning air just after dawn is invigorating for the soul when joggers and dog walkers are out in force taking in the fresh air. 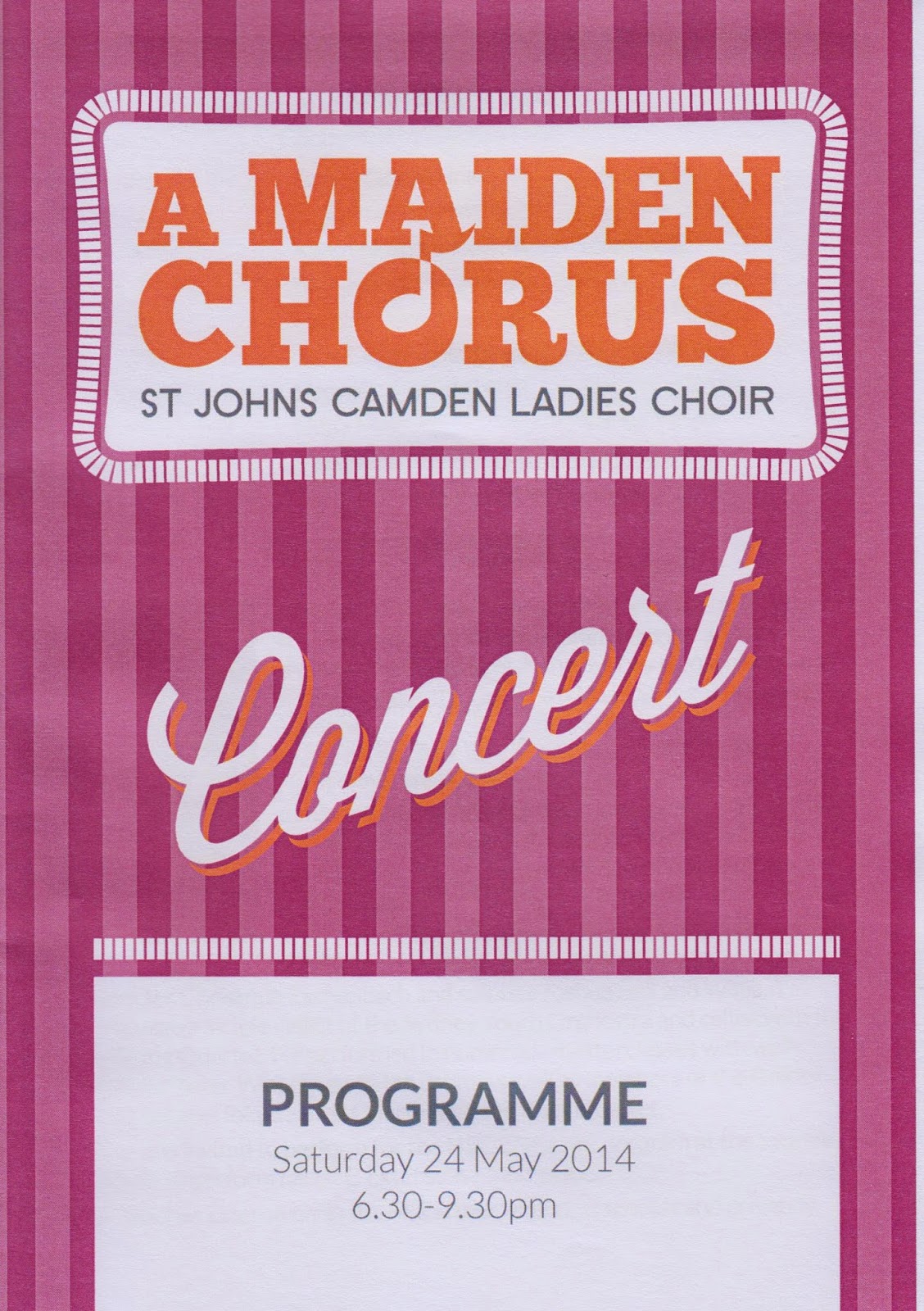 The first concert of A Maiden Chorus, the St John’s Camden Ladies Choir, was held at the St John’s Church Hall on Saturday night 24 May 2014. Under the direction of talented conductor Genesa Lane, the women put their hearts into several splendid a cappella arrangements drawing on influences from African, Latin, Gospel, contemporary and traditional. The angelic voice of Anneleise opened the 2nd set with a solo, and later numbers were supported by an all-male band composed of keyboard, bass and drums.

Acapella singing traces its influences to the religious music of  Medieval period drawing on  Christian, Islamic and Jewish traditions. Some sources claim the origins of a capella are found in the absence of instrumentation is founded in early forms of worship that were without musical accompaniment.

The night’s programme was lifted with talented local cellist Jonathan Bekes who performed several pieces. Jonathan will tour Italy and Norway with the Estivo Piano Trio in 2014 and will also perform in Verona.

The concert by A Maiden Chorus was a fundraiser for the Hooper family who are undertaking mission work teaching in Tanzania later in 2014.

A Maiden Chorus is a community-based women’s only choir whose members are from a variety of backgrounds and ages. The current choir has 27 members and started in September 2013 amongst women from St John’s church.  The choir rehearse on Monday nights at the St John’s church hall at 7.30pm.

Community singing provides distinct benefits for health and well-being. VicHealth commissioned a report called Benefits of group singing for health and well-being conducted by the Wellness Promotion Unit from Victoria University. The reports state that group singing promotes social capital which has positive impacts on physical and psychological well-being. Benefits for individuals can include increased social connectedness, increased sense of belonging, physical and emotional benefits and reduced personal stress.

Read more about the benefits of community singing here. 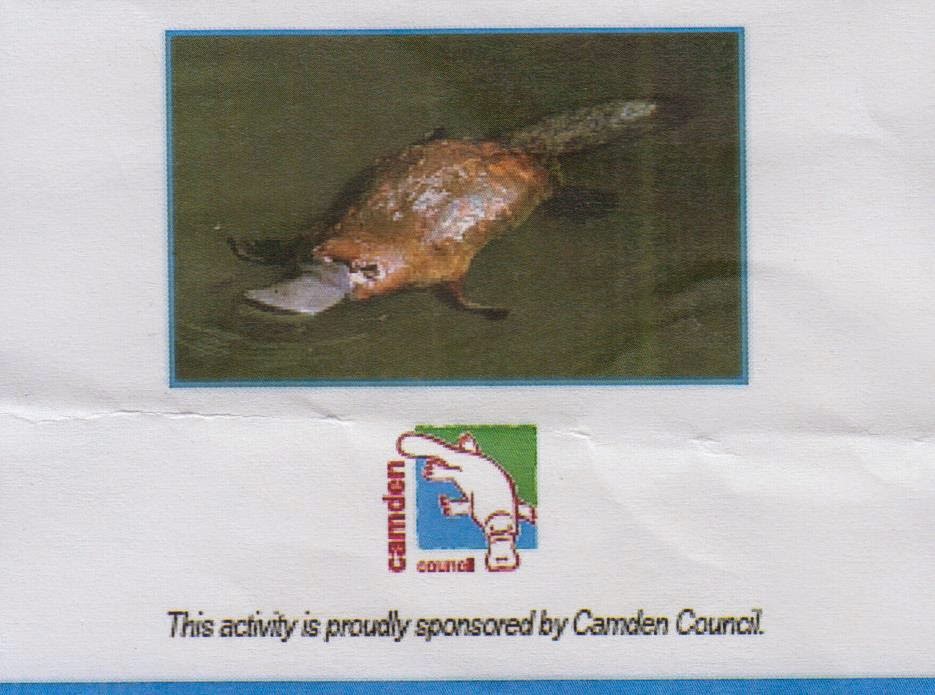 The Doings of the Platypus

Camden Council held a platypus information night on Wednesday 21 May 2014 at Narellan Library for residents of Camden, Wollondilly and Campbelltown areas.

Dr Phalen reported that over the past 50 years, there have been a host of sightings in the Georges River, Nepean River, Shoalhaven River, Wollondilly River Catchment areas. Platypus was recently sighted in the Georges River catchment, with one specimen caught in fishing line. He concluded that the platypus is not threatened and is quite adaptable to changes in its environment.

Members of the audience reported their sightings of platypus in the Georges River and the Werriberri Creek.

The Nepean River has provided poetic inspiration to many people.

While the river has provided inspiration for paintings, sketches and storytelling for other folks.

The river has been at the heart of Camden’s identity for over a century. The river is an integral part of the social heritage of the history of the district.

The Nepean River is one element of the area’s intangible cultural heritage. Unfortunately, Australia is not a signatory to the United Nations Convention for the Safeguarding of the Intangible Cultural Heritage. (Paris, 17 October 2003)

The geography of the Nepean River and its floodplain has shaped the landscape of the area.

The river floodplain is the site of many community celebrations, traditions and rituals and some of the most important is the Camden Show and Anzac Day.


The essence of a moment

What have you noticed while out and about? Our local community is such a pretty place. We really are privileged to capture it sometimes. Just take a deep breath and soak up the moment. You look around, and there is a glimpse of something special. A moment when the sun catches the branches of a tree. A moment when a shadow crosses your path.

One such moment occurred in Exeter Street on the Nepean River floodplain next to the Town Farm. Just another moment in one of Camden streetscapes that visitors come to our community to soak up. These visitors add to the tourism of the area and create jobs in the local businesses that serve them.

Just as day-trippers have done to Camden for nearly 100 years from the Sydney area. The essence of the day-tripper was the experience of the tourists who visited our community in the 1920s and 1930s—the inter-war period when Camden’s Englishness was its attraction.

What a wonder a bit of colour does for a drab streetscape. The aesthetic beauty of flowers and green things are a soothing effect on people’s hectic lives. A bright spot in the day. A hit of happiness. A flourish of fun. A corner of quietness.

If you have a moment, have a look in Oxley Street outside Butterflies Florist. The florist, Angela,   has taken time out to plant flowers and different types of greenery in the flower beds opposite her shop. The colour and greenery provide a freshness, a vitality to the otherwise drab urban environment. It generates happiness. Angela said ‘I have planted roses, lavender, sweet william, geraniums, salvia, gazanias, vincas and marigolds’. She has added a burst of sunlight and brightened up a rather dull part of the streetscape in Oxley Street. We need more of it.

This novel and the attractive process has beautified an otherwise colourless streetscape of tarmac and bare brick walls. The flowers make people feel happier, and they smile at you as you walk past them. Butterflies Florist has created a comfortable zone in Oxley Street precinct.

This complements the greenery in other parts of the Camden central business area. The greenery provides a counterpoint to the rush, rush, rush of daily life. Green is a natural colour that has a soothing effect on people’s outlook. By just slowing down a little as you walk past the greenery of a  Camden streetscape, you might lower your stress levels a little.

Other green gems include the shrubbery outside Camden Council’s John Street Entrance which softens an otherwise plain streetscape and heritage office frontage. The greenery provides a pleasant entry to the council chambers adjacent to historic Macaria.

There are also the garden beds along the busy thoroughfare of Argyle Street. The flowers and shrubbery are a touch of authenticity in our ever-increasing artificial environment—a flourish of colour and a bit of nature. A back to basics approaches that there needs to be more of.

Plants are suitable for the soul. They have a calming effect on people. People smile when there are pretty flowers around them. They provide a moment of relief—a moment when people might reflect on other matters. Flowers and greenery can create a tiny therapy space so that they can have a moment of reflection.

There are health and well-being benefits from having plants around people. Plants have a positive effect on people’s outlook and disposition.

The flowers and greenery around the business centre of the town is part of the Camden aesthetic. It is part of the charm and character of the community. It means many things to many people.

Historically it is the desire by some in the community to retain the country town atmosphere based around the ‘country town idyll’ in the face of Sydney’s urban encroachment in and around the town area.

An extension of the ‘country town idyll’ is a desire by some who want to retain the rural atmosphere in the community.

It is reflected in the open space, the urban parks, the rural vistas, the bucolic countryside and the desire of many newcomers to find a spot where ‘the country looks like the country’.

Read more about the charming town of Camden.

Read about the Camden Dreamtime