﻿
Kirkham is a picturesque, semi-rural locality on Sydney's rural-urban fringe between the historic township of Camden, with its inter-war and colonial heritage and the bustling commercial centre of Narellan.

The arrival of the rural-urban fringe at Kirkham in recent decades has created a contested site of tension and constant change, resulting in an ever-evolving landscape. Successive waves of occupants have created their own stories, heroes and icons through a reinterpretation of history and heritage.

The most recent newcomers have taken ownership of Kirkham's identity, assisted by developer-created exclusivity and the locality's rural aesthetic. The physical landscape of Kirkham is dominated by a bucolic scene provided by the valley of Narellan Creek.

John Oxley (1784–1828) was granted 1,000 acres by Lieutenant-Governor William Paterson, which he had to surrender in 1810. Governor Macquarie subsequently granted Oxley 600 acres, which was increased to 1,000 acres in 1815. The grant was named Kirkham after Oxley's birthplace, Kirkham Abbey in Yorkshire, and had frontages on the Great Southern Road and the Nepean River.There are two heritage icons from the colonial period: Kirkham Stables and Kirkham homestead (Camelot).

The main road passing through Kirkham is the Camden Valley Way which was known as the Great South Road until 1928 when it was renamed the Hume Highway.

The route of the railway ran alongside the Great South Road through Kirkham between Camden and Narellan and was a prominent cultural feature on the landscape. Kirkham Railway Station, which was one of nine stations located on the railway.

Historic Yamba cottage fronts Camden Valley Way (formerly the Hume Highway) and has been a contested as a site of significant local heritage. The building, a Federation style weatherboard cottage, became a touchstone and cause celebre around the preservation and conservation of local domestic architecture.

Posted by camden history notes at 16:48

The outdoor movie cinema is not dead

Cinema Under the Stars 2014

Movies under the Stars again in 2014. Locals families had a great evening when thousands descended on The Australian Botanic Gardens for the annual Cinema Under the Stars as part of the Camden Festival. The show was centred around a family friendly event and organisers were not disappointed. Hundreds of local families with youngsters, mum, dad and grandparents all trotted out with their chairs, rugs and picnics. The food stalls did a roaring trade in sausage sandwiches and Turkish delights. the little ones had passed out by the end of the first feature and most left, leaving the hardy ones to take in the second show. At the finale the crowd, what was left of it, packed up and made their way to the half-empty carpark  in the paddock and left the Botanic Garden.

Cinema Under the Stars 2013

On a recent Saturday night  hundreds of families attended the Cinema Under the Stars at The Australian Botanic Gardens at Mount Annan. It was part of the Camden Festival which runs throughout September 2013.

Cinema Under the Stars

Cinema Under the Stars started out at Macarthur Park in Camden 12 years ago as part of the Camden
Spring Festival but the huge crowds outlived their welcome and a new venue was needed. It was transferred to the botanic gardens where a crowd of several thousand could see the movie without destroying the vegetation or each other.

Movie go-ers were directed to park their cars by the volunteer bush fire fighters in a vacant grass paddock adjacent to the tarmac carpark. Movie go-ers unloaded their rugs, picnic rugs, eskies, fold up seating, picnic baskets and with the kids in tow walked across the parking area to the site of the movie action.
﻿
﻿
﻿

The inflatible movie screen was located next to the lawn amphi-theatre next to Lake Sedgewick, with sound projecting from speakers located either side of the screen. The projector was strategically located on the high side of the lawn. The projectionist was showing slides of the Camden Festival while the sun setting and darkness decended on the crowd.

Movie go-ers were all bundled in warm coats, beenies and  scarves. They brought their blankets, picnic rugs and fold-up chairs and watched the 2012 release Madagascar 3: Europe's Most Wanted, an animated adventure comedy, with voices done by the likes of Ben Stiller. In the movie Alex, Marty, Gloria and Melman were fighting to get home to their beloved Big Apple. Their journey takes them through Europe where they find the perfect cover: a traveling circus, which they reinvent - Madagascar style.

This was followed after a short inteval by the 2012 comedy release of Parental Guidance with stars Bette Midler and Billy Crystal. In the movie Artie and Diane agree to look after their three grand-kids when their type-A helicopter parents need to leave town for work. Problems arise when the kids' 21st-century behavior collides with Artie and Diane's old-school methods.

One of the most important things with all outdoor movie experiences is the food. Going back to the days of the drive-in of the 1960s and 1970s the queue for the hot-dogs, chicko-rolls, and chock-top was one of the most memorable experiences. It has changed little in 50 years. Today patrons line up at the BBQ run by the local Lions Club for a steak or sausage sandwich. Or you line up for a take-away coffee or hot chocolate.

When the movies have finished it is time to pack up all the gear up and the kids, and cart it all back to the car. Making sure not to leave behind anything in the dark. You have to take all your rubbish with you and not a mark of your presence on the botanic gardens lawn. The movie go-ers trapes back across the paddock into the dark. Back to the car with all the gear. 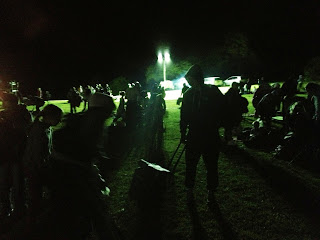 Then there is drive out of the paddock car park, weaving your way between the witches hats, like threading cotton through the eye of a small needle. Follow the leader out of the car park minding not to run over some else's youngster in the dark. Making sure not to drive down a rabbit or wombat hole. Then follow the conga-line of cars out of the  gardens grounds before they shut the gates and lock you in. 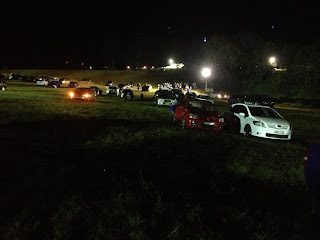 Read more on the outdoor movie experience
@ http://en.wikipedia.org/wiki/Sun_Picture_Garden
@ Willis, Ian (2009), "Whither Heritage, the Experience of the Outdoor Movie Theatre", AQ - Australian Quarterly 81 (6): 35–39,
﻿
Posted by camden history notes at 22:18 No comments: