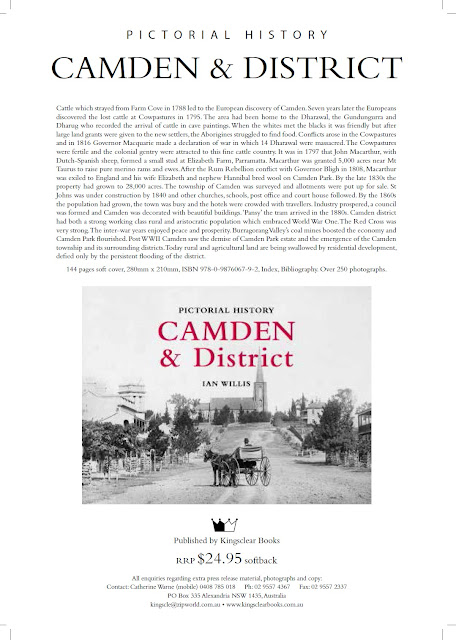 Posted by camden history notes at 12:21 No comments:

A Camden Heritage Icon and the Campbelltown Heritage List


History and Description
It was built in 1877-78 to the design of G.A. Mansfield, who did much of the CBC's architectural work at that time. The contractor was C. Furner of Camden. A one storey extension added 1972-73 by Architects Laurie and Heath, sympathetically following the style and detail of the original building. (State Heritage Inventory)


A fine example of the late Victorian Bank buildings to be found in country towns of New South Wales. It is in an Italianate style with a fine stone entrance porch to the main elevation and a cast iron balustraded verandah and balcony to its two storeys. The wisteria vine which climbs over the verandah is considered part of the Bank's aesthetic contribution. (SHI)

The building has a hipped shingle roof with a tiled ridgecap and painted chimneys. The entrance door is a timber framed glass sliding door with a highlight window. The building has arched two pane double hung windows. There are french doors to the first floor verandah. (State Heritage Inventory)

The entrance doors have been converted to automatic sliding doors. Airconditioners have been installed. Single storey extension. National Estate Database)

An important and noticeable building in a key position on the corner of Camden's two main streets. It continues to be used for its original purpose and well kept over the years. The building is representative of a Victorian Italianate building. It is part of the John Street Group. (SHI)The bank retains good integrity and intactness. (SHI)

In the Campbelltown LGA the council has created a central page with a listing of all the important heritage items for the area. The central page below has links to individual pages for items on its heritage list. 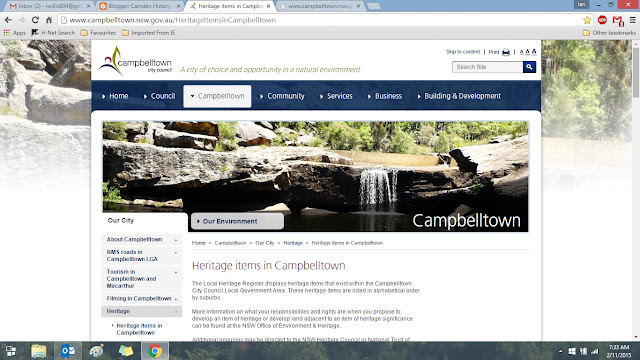 Each heritage item has a title, images, history and description, condition and use, heritage significance, and heritage listing (see below for an example).

﻿﻿The advantage of this Campbelltown Council webpage is that it is easy to find, easy to navigate, concise and all in the one place. While it is true that most of the information is available on the State Heritage Inventory. The SHI website is not as easy to use and navigate and it takes a little persistence to find the information that you are after. 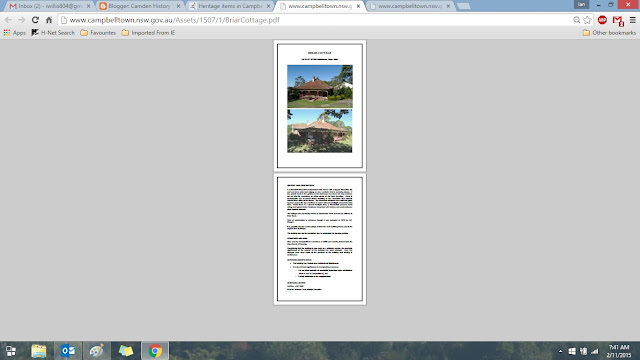 Camden Council has no such equivalent at the Campbelltown LGA heritage list. Its spokesperson stated that it would duplicate  the State Heritage Inventory. This is probably true. Yet the Camden Council website is legalistic and not easy to navigate. While it does provide a link to the SHI it takes quite a deal of time to find it.

Posted by camden history notes at 22:47 No comments:

Do you have a view on the proposed decked car park in Oxley Street?
Do you support it?
Do you care?
Camden Council wants to know your view.
There are stands about the proposal at local libraries and other venues.

Have your say.
Tell Camden Council what you think.
Write a letter to the local paper.

1990s proposals for a decked car park were rejected by council

Are you interested in proposals for a decked car park in Camden in the 1990s?
Did you know that earlier proposals were rejected to Camden Council.
Read more to see why  click here
Posted by camden history notes at 15:13 No comments:

The most prominent tree is a landmark Bunya Pine adjacent to the earlier buildings.

The administration bulding was originally constructed as a school residence, erected in 1877. Repairs and additions were made in 1891 and in 1912 the shingle roof was replaced with corrugated iron. Further repairs were made in 1938, along with adaptation and cyclic maintenance undertaken in subsequent years. The building is of brick construction.

The school building was originally constructed in 1877 and has a simple Victorian aesthetic, with a pitched roof, timber windows and decorative barge board. The building is a brick construction with corrugated roofing. In 1949 a fire destroyed the front section of the building. In 1951 the building was rebuilt as a single classroom using the original bricks and in 1957 it was renovated to provide an office, staffroom and storeroom. In 1987 it was coverted into a staffroom for the school. (SHI)

The existence of some of the trees can be attributed to plantings made in 1890 and subsequent years to mark the celebration of Arbor Day at Narellan Public School. Tree types on the site include a Hoop Pine (Araucaria cunninghammii), Pepper Trees (Schinus molle) and several Eucalypt varieties.

Narellan Church of England School was in operation in January 1854, and may have existed prior to this date. In August 1875 it was recommended that a schoolroom with the accommodation for 40 children and a residence be built.

Land was progressively acquired over time. In 1920, two more lots were acquired which completed the area between Coghill Street, Camden Valley Way and Richardson Road. (SHI)

Appears to be generally good (SHI)

Narellan Public School is a historically important institution within Narellan. For some 130 years it has been the place of learning for many local children, and maintains a number of physical elements through its extant buildings and setting, which are testimony to that historical growth and association. (SHI)

Built by Blackmoor who ran Jack Cross's former shop. Mr & Mrs Halkett who ran it as a private hospital after the Stuckeys sold it.  Ben Linden also known as Miss Stuckey’s House is a bungalow and is part of a residential group of buildings.

The house is located within an commercial/industrial area on the Camden Valley Way. The single storey house has a tiled hip and valley roof. The eaves extend to form a verandah over the entry way. The walls appear to be roughcast brick work. The verandah is supported by plain timber posts.(SHI)

The bungalow and grounds appear generally in good condition.
The building is currently used a residence.

An excellent example of Federation dwelling with a prominent position and landscaped surrounds, and extraordinary history of use within the Narellan Town Centre and Camden LGA. It is a now rare, tangible remnant of Narellan Town's development during the Federation period, and along with the former Burton Arms Inn, Public School, St Thomas' Church and grounds, Narellan Hotel, former butcher's shop and cottage, and milk depot, are the historically most important remaining built elements of Narellan Township's history. Its former role as a maternity hospital is likely to embrace social significance within the local community. (SHI)

The recommended management of the building is to conserve and maintain 6 fabric, landscape, setting and property boundary curtilage.  (SHI)

Posted by camden history notes at 13:27 No comments: