The owners of Gledswood Homestead, Caldla Pty Ltd,  have applied to the NSW Heritage Council to change the curtilage around the historic farm homestead. This means that they want to reduce the amount of land around the homestead that is considered essential to maintain its heritage significance.

The changes to the curtilage can be viewed here

The Gledswood homestead and the gardens are listed on:


Gledswood is an early 19th century farm estate that has close associations with the Camden area which is the birthplace of the Australian wool industry. Built by James Chisholm in c.1830, Gledswood remained the Chisholm family residence for 90 years. A prominent feature at Gledswood is an outstanding colonial garden that was expanded in 1870. The garden featured in Horticultural Magazine (1870) and was romanticised by Hardy Wilson in 1920. The intense and continual interest in gardening at Gledswood has made Gledswood a prominent contributor to the art of gardening within NSW.
Gledswood has historical significance for its association with the early development of
Australia's wine industry. James Chisholm junior planted a vineyard in 1830, and in 1847 vinedressers from Germany were imported to work it. A convict built cellar under the homestead was capable of holding 20,000 bottles of wine (Everett, 2004).

The state of significance for Gledswood states that it has a prominent role in the development of the wine industry and the foundation of the Australian wool industry. The property has an outstanding colonial garden that has been extensively written about by a number of notable authors.

Governor Macquarie granted Huon de Kerilleau  the 400 acres (162ha) which became 'Buckingham; as from 1 January 1810, and he called it Buckingham after the Marquis of Buckingham, who had some part in arranging his discharge Huon de Kerilleau employed convicts to quarry stone on the property and start his building programme. Their first project was the small cottage where they were chained each night. Then they went on to the coach house and the servants' quarters (Carroll, Brian,
The Hume Australia’s Highway of History a Heritage Field Guide, p. 31).

One visitor to Gledswood had this to say about the maintenance of Gledswood homestead by current owner Caldla Pty Ltd. Minzo007 on TripAdvisor stated:


From the car park this farm looks lovely and rustic but closer inspection shows that the heritage buildings have been seriously neglected. No wonder there are ghosts: the former owners would be turning in their grave! The interior and exterior of the old homestead needs renovation or maintenance. Surely as a building built in the early 1800s this place should qualify for heritage listing and therefore the requisite care? The current owners seem to be more interested in weddings and conferences to the detriment of preserving the unique history.  (https://www.tripadvisor.com.au/ShowUserReviewsg255060d556150r166364962GledswoodSydney_New_South_Wales.html)

The intention of the principals of Caldla Pty Ltd in 2013 was clearly flagged. The variation of the curtilage is intended so that the block 1203 can be sold off for housing allotments.

While the Australian Government listing may have been made at the height of the heritage boom in Australia, the listing on the State Heritage Register in 2006 is far from this position. The NSW government seems to care little for heritage in this state. This application appears destined to repeat the same mistakes that were made with significant heritage properties in Campbelltown, where their curtilage was all but destroyed. One example is Blair Athol.

This is a simple case of rent seeking developers compromising the heritage values associated with Gledswood homestead for profit and monetary gain.

The current curtilage is necessary to maintain the heritage significance of the homestead and outbuildings.  Minzo07 (TripAdvisor) has drawn a damming conclusion based on the actions of the current owners towards the heritage values of the Gledswood homestead. This application needs to be rejected. The curtilage for Gledswood needs to stay at levels approved in 2006.

Do you agree with this?

If you have any views on this matter you can express then by writing to:
Heritage Council of NSW
Locked Bag 5020
Parramatta NSW 2124
heritage@heritage.nsw.gov.au
by  5 January 2017

Or speak to
David Hoffman, Heritage Officer at the Heritage Division, OEH, on (02) 9873 8582 or david.hoffman@environment.nsw.gov.au
Posted by camden history notes at 20:19 No comments:


The rotolactor was a piece of industrial modernism introduced at Camden Park in 1952 by Edward Macarthur Onslow.


The idea came from the USA in the 1920s and the first rotolactor was built in New Jersey shortly after then.


The rotolactor was a huge tourist attraction for Menangle with up to 2000 visitors a week.


The rotolactor suffered from technical problems and closed in 1977. It opened shortly after this but finally closed down in 1983. 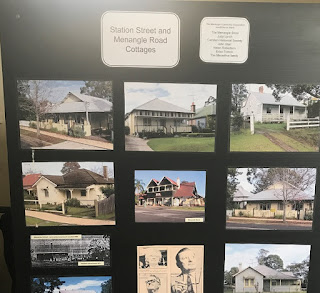 
Tucked away in the back of The Menangle Store, in a dilapidated room that houses the beautiful, original baker's oven is a lovingly curated photographic display. 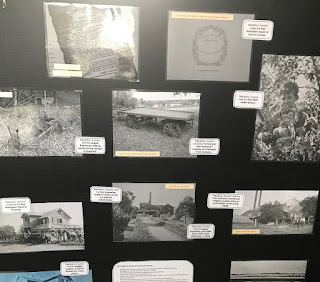 Past members of the Menangle Community Association, with the leadership of the late Maurice Blackwood, collected photographs and memorabilia from residents. They then spent countless hours creating a visual representation of our beautiful village. 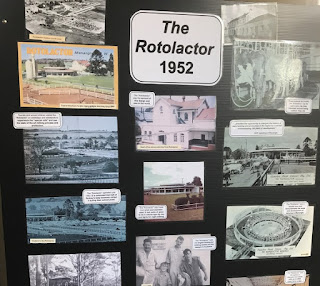 The group held a travelling roadshow featuring the display. Some of the venues visited included libraries and museums. They also formally presented to politicians and councillors, highlighting Menangle's unique and important history. 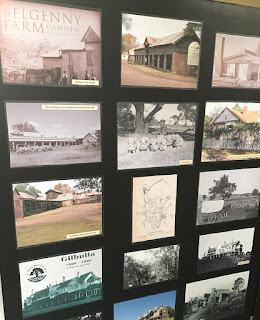 The Menangle Community Association would like to thank The Menangle Store for  volunteering as the ongoing venue for the display. 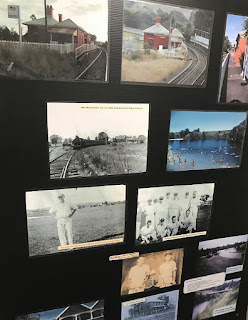 Laura says that you can see the display  at The Store, 2 Station Street, Menangle.

As well as the display there is the Menangle Walking Tour available  @  www.menangle.com.au

Posted by camden history notes at 18:04 No comments:

St John's Church is Camden's most important heritage icon. It is disappointing to hear that church authorities want to sell off some of their site.


The church site, including the Rectory, is part of the foundational story of the township of Camden and its District. The church has played a fundamental role in place making and building community identity over the past 150 years or more. St John’s Church is the moral and emotional heart of the Camden township.

The church is an integral part of the story of the Macarthur family. The church is still, as was in the past, part of the historic vista from Camden Park house to the Camden village. There are representations of the church in engravings dating from Andrew Garran’s Picturesque Atlas of Australasia (1886).

The church is part of the England landscape aesthetics that was so evident during the Interwar period in the Camden township. Writers like William Hardy Wilson, Ure Smith, Eldrid Dyer and others have written in lyrical fashion about the importance of the church to the Englishness of the Camden village.

The church is set within a fine group of other ecclesiastical buildings that includes the Rectory (1859) and church hall (1906), together with the cemetery in a rural landscaped environment resplendent in native and exotic mature trees, fence lines, paths and memorials.

Central to the town plan was the siting of the church of St John's as the Sydney Herald of 14 February 1840 noted that 'on the greatest elevation of the adjacent hills it is proposed to erect a church, the situation for which will be highly picturesque and commanding'. By the time ofthe sale of the town allotments, the church was under construction and was the main feature of the incipient township prominently sited on the highest point overlooking the principal street, John Street.

At the same time as clearing land for the new township in 1835, James and William Macarthur appealed to their neighbours and employees for help in founding a church (Anglican). By September 1835, 644 pounds had been collected, with the majority (500 pounds) coming from the Macarthurs.

The church and the rectory are a legacy from the 19th century Camden gentry and other members of the community who funded its original construction. It is very easy to destroy the integrity of the church precinct along Menangle Road, which has remained intact from the church’s foundation.

about St Johns Church and its precinct on the Australian Heritage Database:

There are a number of stories appearing the local press and other material.


Camden Council voted (12 July 2016) to put on public exhibition minor amendments to the Camden LEP 2010 following a Gateway Determination by the Department of Planning and Environment.

The Planning Proposal seeks to improve the overall operation and accuracy of the Camden LEP (2010) by making changes which are administrative or low impact in nature with respect to the following:


Camden  Council has a number of relevant documents on exhibition:

Comments can be emailed to micheal.midson@camden.nsw.gov.au
Posted by camden history notes at 00:49 No comments: