A sunny brisk day attracted a crowd at a market day with a difference that was recently held at the historic backdrop of the Camden show hall and grounds.

The scarves and beanies were out at the third year of the market day for The Argyle Affair which was held over a recent weekend.

A great day for hipsters, grandparents, young families and friends at this great local event.

Live and local entertainment from young song writers and singers was provided in the marquee. The stage provided an opportunity for young and up-and-coming musos to do their stuff and show their wares to their adoring fans - even if they were rusted on family members.


There were ample pop-up food stalls that offered a range of hot delicacies from pulled beef to wholesome soup and others. Even the food stalls are sustainable these days with solar panels generating power-have panel will travel-anywhere.

The Argyle Affair was originally started in 2015  as the brainwave of local organisers Brooke and Peta who felt that local artisans needed a platform for their wares. Their website states:


The Argyle Affair was born from a shared passion to bring the community together to create a positive, creative event and supporting local charities. We felt that Camden needed a platform to showcase local & surrounds, makers, artists and performers. It was time that Camden had their time to SHINE!

There were around 25 stalls in the show hall and outside. By lunchtime there were lots of folk moving through the show pavilion.

The promoters state on the website that they were looking for edgy product and artisan crafts with a point of difference and a 'wow factor'.


We are looking for evidence of personal contribution in design, make or collaboration of the product. High quality products that display outstanding workmanship. We are on the hunt for unique products and services that push the design envelope.

Stallholders were certainly up to mark.

The Argyle Affair sponsor a local charity and this year it was 'Turning Point' who are a Camden based-comunity welfare centre in John Street. Turning Point state on their website:


We aim to provide a safe and confidential environment where we can offer assistance, providing welfare services such as emergency food relief, advocacy, document assistance, phone access, and computer availability with free Wi-Fi.

Market goers were asked for a gold coin admission or hand in an item of food that went to Turning Point.

Another great initiative by Camden locals who have combined business acumen with a heart.

Posted by camden history notes at 21:47 No comments:

Lots of fresh young talent all got a guernsey on stage at the Camden Civic Centre.

The Camden Youth Council is an initiative of Camden Council that assists the council develop programs for young people between 15-25 years of age.

The youth council attempts to give young people of the Camden LGA a voice through projects and events.

One of these events is Camden Shorts.

On Saturday night there were a string of vocalists, supported by a dance trio and a theatresports trio of young fellows.

Each young hopeful had two performance pieces to nail for the assembled crowd.

You never know one of these young folk might get their start in the entertainment industry from this gig and then be the next superstar. And do not forget you saw them first at the CCC 2017 Camden Shorts.

The artists enthusiasm was infectious as often the young are, and they received undivided adulation from adoring fans of mums and dads, aunts and uncles, nans and pops and fellow rusted on supporters.


The younger the budding artists the greater the adulation.

A wayward note here and there mattered little in the great scheme of things.

Apparently it was reported that there were 200 bookings for this year's show, compared to the first year in the Ferguson Room with 90 parents and friends.


Those who booked and did not show will be forever disappointed at not taking up their free tickets.

The evening ran on a tight schedule with a great support crew with sound and lighting although the kids could have done with a simple intro from an mc of some sort.


The food offering and bar service were up to Civic Centre standards, while prior warning for fans and patrons might have improved their sales a little on the night.


The enthusiastic crowd were well satisfied at the end of the night's entertainment by this band of young fresh performers.

You can also stay up to date with the Camden Youth Council by visiting the Facebook page, phone 4645 5021 or you can send an email for more information.


The Camden town centre was recently transformed into a gig-venue with a difference.

The town centre held the first live music festival of its type hosted by Camden Council.

Camden's main shopping precinct hosted a free music event in the form of the Live and Local Music Festival.

The entertainment ranged across 14 venues on a Saturday afternoon between 2.00 and 6.00 in the early evening. 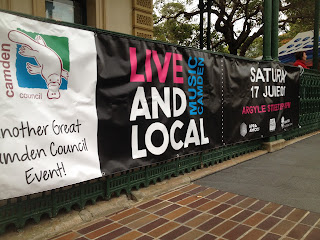 Some of these were not your standard music venue.


The more interesting music sites were a clothing boutique, a shoe store, an interior design store and shopping arcade.


There were also the more traditional music venues ranging from local hotels, restaurant and  local cafes. 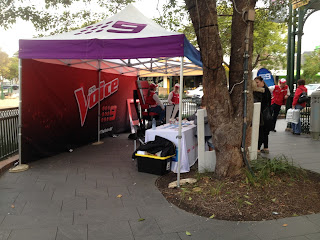 There were a total 27 artists and musicians made up of solo acts, to quartets and bands.


Artists ranged from the professional to up-and-coming music outfits.


This unique festival will showcase the diverse musical performers of our area as well as the variety of venues and shops in the Camden town centre, This is an exciting opportunity to promote Camden as a cultural tourist destination for live music in the region.

A full list of artists and venues is located here.


Live and Music facilitators were walking around all afternoon to make sure the venues worked well. 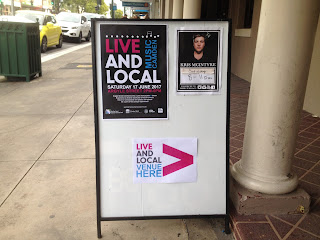 Facilitators interviewed some fans seeking feedback. One comment from one fan was that promoters need to advertise the event more widely.


Talking around the area to those who attended the festival they were very impressed. I have heard comments like 'it is about time' and 'long overdue'. 'Great local talent'. 'The venues were great'. 'When is the next one'. Congratulations to the organisers and sponsors for a great all round effort.

Posted by camden history notes at 23:58 No comments:

Menangle Gate Lodge has historical significance as one of the pair of gate lodges built by the Macarthur Onslows for the Camden Park Estate.

Today (together with the lodge at the entrance near Camden) provides evidence of the former extent of the estate (one of the most significant colonial properties in Australia) as well as demonstrating the architectural embellishments thought appropriate to large estates in the late 19th century.

The building also has aesthetic significance as an attractive and largely intact example of an "Arts and Crafts" style estate cottage in the region and even for its associations with the architectural firm of Sulman & Power, which designed many buildings on the estate and in the adjacent Menangle Village.

The cottage's aesthetic qualities are further enhanced by its attractive rural setting and sitting adjacent to the remains of the original Estate gates and driveway.

The Gate Lodge is a single-storey weatherboard cottage with a hipped and gabled tiled roof and brick chimneys, one of which has a decorative patterned brick base.

The gables have timber battening, and the north roof covers a small porch with timber latticework and frieze, while the eastern gable projects on brackets.

Beneath the east gable is a corbelled bay window with a small panel at the top. The doors have small-pane transom lights. The three panel, the half-glazed front door is off a small porch at the south-east corner.

On the gables are plaques bearing (different) coats of arms and the mottos "FESTINA LENTE" (to the east) and "FIDE ET OPERA" (to the north).

One of these plaques was moved from the gate lodge at the other entry to Camden Park. The property still retains a large part of the original picket fence, but this is being renewed.

There is a fibro extension to the rear (south-west), the original verandah flooring was replaced (20 November 1990), and other maintenance items include: fibro replaced on northern lattice enclosed porch, roof re-tiled, and fence renewed.