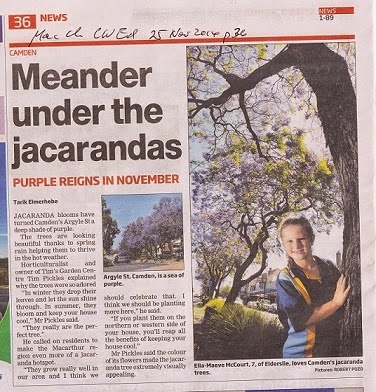 The Jacarandas in Camden and surrounds are out in bloom again. They are a picture of colour and when a breeze pops  up or it rains they carpet the ground. ﻿﻿﻿﻿﻿﻿﻿﻿﻿﻿


Local jacarandas add to the sense of place and character of the area. They add to the picturesque aesthetic of the Camden district. Mr Tim Pickles stated in the Camden press that they are suited to the local area.

As you walk around Camden streets you will come across the current flush of purples and  mauves. The local jacarandas are in full bloom and they have spread a colourful carpet across local streets. The streetscapes provide a wonderful vista  of fantasy and charm. They take you on a journey of the imagination into a another world.

Jacarandas have been a feature of the urban landscape for quite a while in the local area.

The jacarandas were planted in Camden’s main street in 1927. (Macarthur Chronicle 24 June 2006)

In 2006 Camden mayor Chris Patterson asked the question should the jacarandas in the main street be replaced and he got a very loud response from the community. Save our trees!


The Camden Chamber of Commerce first proposed the removal and replacement with Manchurian pear trees in early 2006.

The Macarthur Chronicle reports that the unseasonably hot weather recently has resulted in the trees blooming early in the local area. (Macarthur Chonicle (Camden Edition) 12 November 2013) Jacarandas also bloomed early in drought years of the early 2000s giving a wonderful burst of colour in suburbs of Elderslie, Camden, and parts of Campbelltown and Picton.

In October 2013 the hottest day was Monday the 21st with a maximum temperature of  36.4°C while the monthly average for October is 27.6°C. October was also unseasonally dry, which according to horticulturalist Tim Pickles, has resulted in better flowers and more of them. The jacaranda originally came from Brazil  and really  like the warm conditions. (Macarthur Chonicle (Camden Edition) 12 November 2013)

Charm and Character of the Old

﻿What is it that gives Camden its charm and character? The answer is found in what still remains of the 1940s and 1950s country town of Camden, that is, its  rural and cultural landscape.

A walk around the central area of Camden reveals to the casual observer that the town is still strikingly similar to what it was like in the 1940s, especially the streetscape. Along streets like Menangle Rd, Broughton St, Murray St, Barsden St, Park St, Hill St, Mitchell St, Elizabeth St, View St, Alpha Rd, John St and even Argyle St. For example, the view along John Street from Camden Public School to St Johns Church is remarkably similar to that  of 60 years ago. Even the view down Argyle Street, especially building heights and street frontages, is similar to the times when the Hume Highway came through the centre of the town.


The panorama of the township across the floodplain  from a number of locations, eg, Macquarie Grove, Elderslie, or Cawdor,  is largely unchanged from the Second World War. There is the picturesque church on the hill, framed by the town and the farmland in the foreground.  Much as it was when RAAF fighter pilots at the airfield were worried that they would hit the church steeple as they took off on their missions.  As visiting RAAF airmen came into Camden on leave along Macquarie Grove Road the profile that the town made against the skyline would be very familiar to them today.

When the visitor enters the town from the north they still pass the old milk factory where the local dairy farmers unloaded their milk cans from their horse drawn carts. Coming into the township from the south along Cawdor Road the rural landscape gives way to the village showground as it has done since the 1880s. Or along Broughton Street, the visitor  can still image entering the town in 1940s passing the rows of neat weatherboard and brick cottages with their well maintained gardens.  The visitor walking along Menangle Road  passes the Federation houses adjacent to  Macarthur Park,  St Johns church and Dr Crookston's house. The same setting as the 1940s when young female voluntary aids walked up to Camden Hospital to do their wartime duty.

The old part of central Camden has a number  of attractive streetscapes which illustrate the town's Victorian and Edwardian past . From the days when the local policeman would tie up his horse outside the police barracks and everyone in town knew that 'Pansy' had arrived at the railway station. The stationmaster would wander over from his house in Elizabeth Street, which still exists, to attend to his official business.

The farmland that surrounds the township is part of the rustic charm and aesthetic value that attracts many tourists to the town. The landscape of the Nepean River floodplain has shaped the image of the town from the 1840s and still determines how people view the town when they visit it today.

The Camden of today still shows the signs of the social and community activities of the country town of the past. For example during the Second World War the ladies of the Camden Red Cross would go to the weekly sewing workshops in the town hall, now the library, while their husbands spent the day at the saleyards. And the location of the churches, shops, garages, showground, community halls, hotels, government buildings and parkland have remained unchanged in years.

Despite recent developments in central Camden  many of the elements of Camden's rural  past still exist.  They give the town its rustic charm and pleasant ambience, and attract the Sunday visitor.  It would be disappointing to see any short sighted decisions made today that might damage this character.

Local government in the Camden area in its current form was originally established in 1883 and, until the First World War, was dominated by Camden townsmen.

After the war the success of the local dairy industry shifted political power on council to the interests of the landed gentry.

The success of the Burragorang Valley coalfields after the Second World War shifted the power base, again, to miners and local business interests.

From the late 1960s  the rural nature of the area has been increasingly compromised by successive state governments which have seen the LGA as a growth area for Sydney urbanisation. This was detailed in the Sydney Region Outline Plan in 1967, and from it came the Three Cities Plan in 1973.

Throughout this period council administration has been located in the Camden township, although some administrative functions have shifted to Narellan in recent years, better reflecting the commercial  and demographic realities of the LGA.

A Little Bit of the British Empire

Historically the LGA has been an outpost of the British Empire with Anglo-Australian Christian traditions (a ‘little England’) where localism and parochialism, amongst a host of  factors (conservatism, interpersonal and familial networks, social hierarchies, gender expectations, rugged individualism, intimacy and rural ideology), typified the social and cultural make-up of the area.
Read more about the history of Camden local government click here  and here
Read about the history of Camden at the Dictionary of Sydney
Posted by camden history notes at 19:57 No comments: