This image shows a souvenir white glazed china tea cup dating from the 1930s-1940s. It is Shelley porcelain ware made in England for Whiteman’s General Store, Camden. The transfer of St John’s Church is dated 1910.


A souvenir, from French for memory, is an object that is treasured for the memories associated with it.

This type of tea cup was sold to tourists who visited Camden on day trips and those who wanted a momento of their visit to the area.


Souvenir tea cups, plates, ash trays and other nic nacks were common for highlighting 'the best' of country towns and Sydney suburbs throughout the 20th century. They complement souvenir teaspoons and other momentos.

See more of these type of souvenirs at the Camden Museum.
For more information http://www.camdenhistory.org.au/cmindex.html
Posted by camden history notes at 13:45 No comments:

The Camden Art Committee launched the 39th Annual Camden Art Prize and Exhibition on Friday 2 May 2014 at Camden Civic Centre.

The exhibition was launched by Mr Angus Trumble, the director of the National Portrait Gallery in Canberra. Mr Trumble was appointed as the gallery director in December 2013 after leaving his position at the Yale Centre for British Art in Connecticut, United States. Mr Trumble was also previously the curator of European art at the Gallery of South Australia.

The exhibition is open between 2 May and 9 May at the Camden Civic Centre in Camden.

Art Committee president Gaylene Feld said that the prize was possible due the generosity of donors. The aim of the prize is to support artist's work and is an acquisitive prize.

There were a total of 273 works on display in a number of categories including portraits, traditional, local, works on paper, watercolour and photography. The judges in 2014 were Sue Gasser, Colina Grant and Patricia Beale.

The yearly food and wine festival AnnanRoma  was held on Sunday 13 April 2014 at The Australian Botanic Garden at Mount Annan. The weather was kind and while the clouds rolled in it did not rain. The temperature was mild with a slight breeze from the south. There were a host of stalls tempting the hundreds of people with delights of all sorts. There was wine tasting, samples of eatery menus, and chocolates coated strawberries, ice-creams and drinks of all types. For others there was hot chocolate and espresso coffee. Visitors were entertained by a great line up of singers entrancing the gathered masses. There were also stalls for In Macarthur magazine, Destination Macarthur and the Macarthur Centre for Sustainable Living. All up a great days entertainment was had for the whole family. 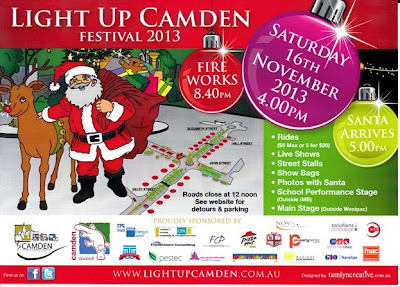 Thousands of local residents and families enjoy the Light Up Camden festival every year. There are hundreds of stalls along the main street, with fireworks later in the evening. Festivities in  2013 were held between 4.00 and 9.00pm and the arrival of Santa  is always a big hit with the little ones. A special part of the event is the lighting of the Christmas tree, which is located at the intersection of Argyle Street and John Street, and dominates the town centre during the festive season.
The organising committee held it on a Saturday night in 2012 for the first time, previously held on a Thursday shopping night. The Light Up Camden festival in its current incarnation was started in 2006 by the Camden Chamber of Commerce, Camden Council and a number of local businesses. Before this the festival, which started in 1994, was organised  by the Camden Main Street 355 Committee of Camden Council with the support of the Camden Chamber of Commerce.

Weather always plays a role in a success and generally the organisers have been blessed with good weather, in 2011 rain forced cancellation. Crowds have grown over the years and in 2004 1500 people attended the festivities.
﻿

The Cobbitty Markets are always a popular attraction in the local area. They started in 1982 in the grounds of St Pauls Anglican Church at the initiation of Cobbitty Public School teacher Martin Frohlich. In 1987 the markets moved across the road into the grounds of the school, where it has been ever since. The markets support a host of local charities over the year with over $700,000. (Camden Narellan Advertiser 2 May 2012)

﻿
On a bright sunny Sunday in September, temperature 25 degrees, clear blue sky and a light south-westerly breeze hundreds of families enjoyed a relaxing day out on the Camden Town Farm. Music was provided by legendary Sydney jazz band Galapagos Duck, who have been in around various line-ups since the 1970s. There were a host of food stalls, wine tasting, children's entertainment with face painting, jumping castle and kids zoo. Some brought a picnic, while others enjoyed the providors and others watched the cooking demonstration.

The Camden district community have enjoyed festivals of one sort or another since the colonial days. From the New Years Day Carnival of the Federation period to the yearly parade of farming at the Camden Show and the Festival of the Golden Fleece in the 1960s. These have been a time for the community to come together and enjoy ﻿the company of family and friends.

A major event on the social calendar of a number of picturesque villages in the Camden district were the annual New Year’s Day Sports Carnivals. They were part of the English traditions brought to the area by colonial immigrants, and in 1915 they were held in the villages of Cobbitty and The Oaks. Sports carnivals  were  wonderful community events that included all classes of villagers regardless of their station in life and during the First World War they held special appeal for patriotic fundraising.
These social and cultural traditions were not isolated to the Camden district and have been held in many other parts of Australia. They are still carried on today in some localities, for example, Glenlyon in Victoria (started in 1857) and Perlubic Beach in South Australia (started in 1914).

The New Year Sports Day in the village of Cobbitty was a hallowed community event which started in 1866 The day included a variety of athletic and novelty events and finished with a gala concert in the evening. . It was one of the premier events on the social  calendar, and local resident Donald Howard, maintains in his Cobbitty’s Finest Hour (2010), that spectators and participants came in their ‘droves from miles around’.

The Camden News (17 Dec 1915) reported that there was a ten event programme  starting with the major event of the day the ‘Narellan and Cobbitty Handicap Footrace’ over 125 yards for male competitors. The running track, according to Donald Howard, was on the village green between the parish hall and St Paul’s Church. Entries had to be in by Boxing Day with an entry fee of 1/- and an acceptance fee of 1/6. There was fierce competition from the young men of the village for the handsome first prize  of £5, which  was twice the weekly wage for a rural labourer. Quite an amount for any villager, and first place attracted quite a bit of status and prestige for the winner. Even the second prize was a respectable 25/- and third prize 5/-.
Dress regulations for competitors in the ‘Handicap’ were strictly enforced with ‘trousers to the knee, or amateur trunks and singlets’ that had to be approved by two male members of the local gentry, Mr FWA Downes of Brownlow Hill and Mr TC Barker of Maryland. Race organizers conveniently  started the programme of events after lunch for competitors, which allowed village revellers to recover from the New Year’s celebrations. The ‘Handicap’ was put in the hands of the starters at 2.00pm.
Viillage youth were not left out of the story and were able to get a feel for the main event by entering their own footraces, one  for youths (14-18 years) and another for boys (under 14). Here  they rehearsed  the tactics that they might employ in main event when they were old enough.
Other events on the programme catered for those locals not able to qualify for the footraces, and included high jump, ‘stepping’, and ‘throwing at wickets’, while the village women were allowed to take part in ‘nail driving’.
Village elders held positions of importance as starters, judges and referees and  supported their social status by donating appropriate cash prize for races. The Camden Brass Band was located in the ‘grounds’ and provided rousing patriotic tunes throughout the day. These tunes were enjoyed by the village ladies who entertained themselves during the day with tea in the parish hall.
Village women sold  their cooking, sewing, knitting and other ‘fancies’ at the sports day bazaar. The bazaar raised significant amounts of money for village causes, particularly the St Paul’s Church missions. The bazaar auxiliary was made up of village women  who were good organizers, but never sort the limelight that was bestowed on the male race organizers.  During the First World War the village women’s fundraising efforts, which were considerable, were directed to patriotic purposes, including the local branches of the Red Cross.
The  sports day festivities were closed in the evening with the Grand Concert held in the parish hall. The concert started at 8.00pm and the front seats were sold for 2/- while those less financially able bought seats at the back of the hall for 1/-. Local personalities and school children performed a variety musical items for the entertainment of the assembly, and occasionally a ‘big name celebrity’ was hired from the city. Donald Howard sadly recalls that the last Cobbitty Sports Day was held in 1941, due to a combination of  petrol rationing, material costs  and a general pre-occupation by villagers with the war effort.

Another district sports day was organized on New Year’s Day 1915 in the village of The Oaks. While not as prestigious as the sports day at Cobbitty, it did attract an enthusiastic crowd. It was organized by the Literary Institute and held in ‘Mr WS William’s paddock’, just outside the village. There was a 15 event programme starting with the premier event, ‘The Oaks Handicap’ over 130 yards. Prizes were awarded to the first 4 placegetters, with the winner receiving £2.  The sports day was more inclusive of the wider village community than Cobbitty and  included a tug-o-war, guessing competitions and a number of horse events. The horse events were a village specialty and the village even had its own race track. Refreshments were sold on the grounds by local women and the day was topped off by a night-time social which had ‘first class music’ from a local band. District sports day was not confined to The Oaks and Cobbitty. The village of Mount Hunter had earlier held a sports carnival on Boxing Day 1914, while the Camden Cycling Club was to hold a major gala day on Anniversary Day (Australia Day) 26 January 1915 at the Camden Showground, with a range of ‘bicycle, athletic and military events’.  (Camden News 17 Dec 1915)
﻿
﻿
Posted by camden history notes at 21:31 No comments: